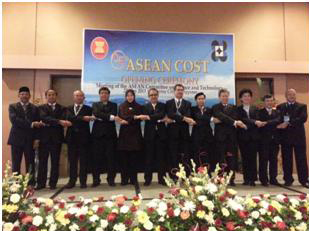 PHILIPPINES, 23RD May 2013 – The 65th ASEAN Committee for Science and Technology (ASEAN COST) Meeting was officiated this morning by the Honorable Mario G. Montejo, Philippines’ Secretary of Department of Science and Technology, in a brief and colourful ceremony attended by ASEAN delegates and members of the diplomatic corp. The 65th ASEAN COST and related meetings are currently being held at  Tagaytay City, a volcanic resort city south of the capital, Manila.

The Malaysian delegation is led by YBhg. Dato’ Dr. Madinah Mohamad, Secretary General of the Ministry of Science, Technology and Innovation and Malaysia National COST Chair. His Excellency Dato’ Mohd Zamri bin Mohd Kassim, the Malaysian Ambassador to the Philippines was also present at the Opening Ceremony.

The 2-day (from 23 to 24 May 2013) COST meeting, held bi-annually, serves as a platform for the ASEAN Member States to take stock and review their efforts in realising the ASEAN Community by the year 2015 as well as a forum for discussions and exchange of views on regional and international issues in the field of science and technology.

The main focus of the 65th ASEAN COST will be centered on the development of the new ASEAN Plan of Action on Science, Technology and Innovation for the period 2015-2020 (APASTI 2015-2020) which was tasked by ASEAN S&T Ministers during the 7th Informal ASEAN Ministerial Meeting on Science and Technology (IAMMST) at Brunei Darussalam last year. This study is being conducted by Indonesia and the outcomes of the study will be presented at the 15th ASEAN Ministerial Meeting on Science and Technology to be held later this year.

The COST Meeting was preceded by nine Sub-Committee and two Advisory Body Meetings which were held from 20 to 22 May 2013 at the same venue. An Informal Dialogue of COST Chairs was also convened on the morning of May 22nd 2013 to discuss the upcoming 66th ASEAN COST and 15th ASEAN Ministerial Meeting on Science and Technology (AMMST) scheduled to be held in November 2013. As a result of Cambodia’s withdrawal, Malaysia has conditionally agreed to be the next host subject to government approval. These meetings will be held in conjunction with the World Innovation Forum Kuala Lumpur (WIF-KL) 2013. At the sidelines of WIF-KL 2013, Malaysia has also proposed two satellite events to be held i.e. the SEA-EU-NET Showcase on Innovation and the ASEAN-EU Ministerial Roundtable.