MALAYSIA AND MYANMAR SIGN MOU ON SCIENCE AND TECHNOLOGY COOPERATION 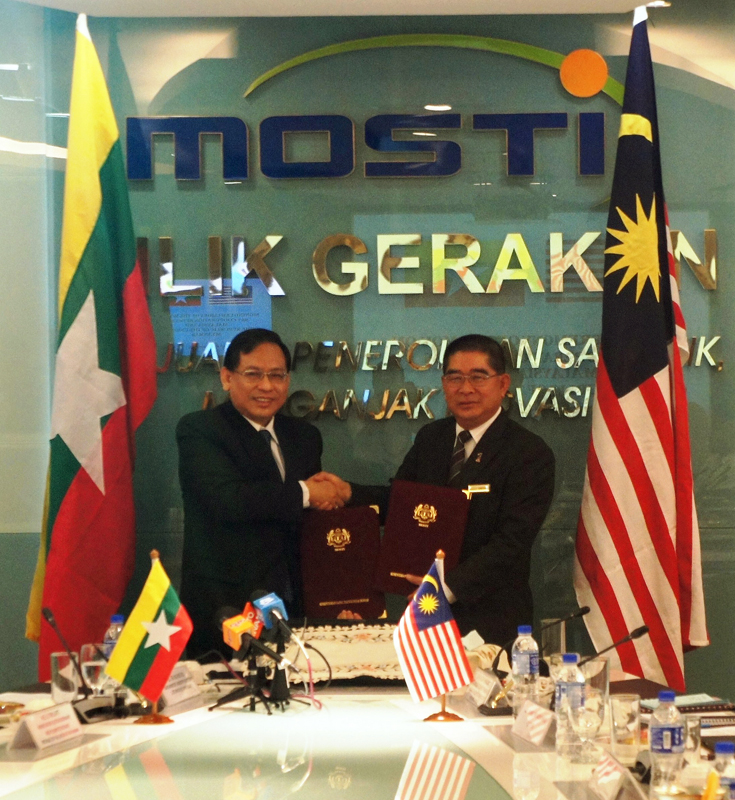 PUTRAJAYA, 5 FEBRUARY 2013 – Malaysia and Myanmar today inked a Memorandum of Understanding (MoU) on Science and Technology (S&T) cooperation to forge greater S&T collaboration between both countries.The MoU was signed by Minister of Science, Technology and Innovation Datuk Seri Panglima Dr Maximus Ongkili and his Myanmar counterpart, H.E. Dr. Ko Ko Oo at the ministry today witnessed by senior officials from both sides.The idea of the MoU was first mooted during Dr Ongkili’s courtesy call on H.E. U Aye Mint, the then Myanmar Minister of Science and Technology, on 26th April 2012 during his working visit to Myanmar. Negotiations were underwayat the sidelines of the 63rd ASEAN Committee on Science and Technology held in Nay Pyi Taw, Myanmar in May 2012 and the finaldraft was agreed upon on 5th November 2012.Presently, both countries have an umbrella agreement on Economic, Scientific, Technical and Cultural Cooperation signed on 12th August 1996 under their respective Ministries of Foreign Affairs.The MoU provides for knowledge sharing and expertise as well as facilitate scientific and technological capabilities for the purpose of advancing the economies of both countries.  Both countries will also support the participation of their public and private sectors including universities, institutions, societies and organisations in joint collaboration projects.With the signing of the MoU, a Joint Committee on S&T Co-operation will be established to determine priority areas; plan, coordinate and monitor the bilateral cooperation in science and technology, as well as consider proposed cooperation. During the bilateral meeting held before the signing of the MoU, both countries agreed to prioritise and start cooperation and collaboration in biotechnology, standardisation and ICT sectors.During his working visit to Malaysia from 4th to 7th February 2013, H.E Dr. Ko Ko Oo is scheduled to visit several MOSTI agencies such as Multimedia Development Corporation (MDeC), Malaysia Biotechnology Corporation (BiotechCorp) and MIMOS Bhd.