Malaysia Reaffirms Its Commitment on Antarctica 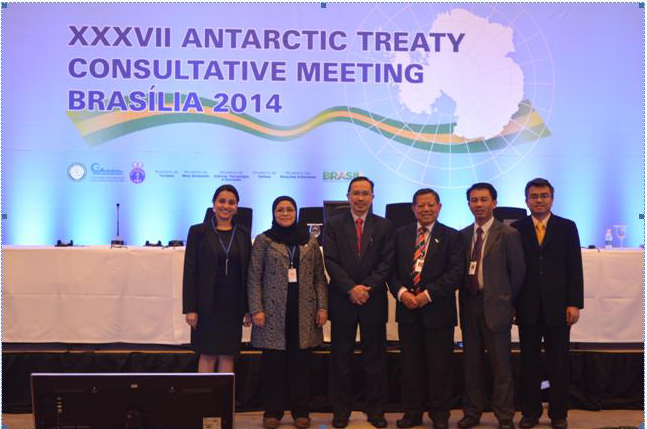 Malaysia was represented by a seven (7) member delegation at this year’s ATCM, as follows:

During the meeting, Malaysia was congratulated by member states including the U.S., UK and Australia at the ATCM today on the detention of two ships while anchoring illegally in the Tanjung Sedili waters in Kota Tinggi, Johor on 30th April 2014. Both ships were found to be harbouring fish, believed to be in violation of the Commission for the Conservation of Antarctic Marine Living Resources (CCAMLR) for illegal, unreported, and unregulated fishing. The successful capture was done by the Malaysian Maritime Enforcement Agency (MMEA).

In its official report to the ATCM, Malaysia highlighted its active scientific presence in the Antarctic through the Malaysian Antarctic Research Programme (MARP) with 15 ongoing research programs involving about 5 field expeditions. Under the programme, about 30 researchers and 30 post graduates students are currently undertaking research in various fields namely geology, geosciences, remote sensing, polar microbiology and ecology in the icy continent.

The report also highlighted that the Sultan Mizan Foundation on Antarctic Research which was established in July 2012 has disbursed 7 fellowships to deserving young scientists. Besides providing fellowships and research grants, the Foundation continues to undertake awareness programmes to promote the importance of the Antarctic region among school children and the Malaysian public in general.

Malaysia also highlighted its successful hosting of the biennial Malaysia International Seminar on Antarctica (MISA) for the 6th time in October 2013 and announced that it will host the SCAR Open Science Conference (OSC) in 2016. Additionally, Malaysia, as the chair of the Asian Forum for Polar Sciences (AFoPS) for the term 2012 – 2014, will host the 10th anniversary of the founding of AFoPS which will be held in October 2014.

Malaysia informed the meeting that the National Antarctic Research Centre (NARC) had recently signed a Memorandum of Understanding (MoU) with Instituto Antartico Chileno of Chile to strengthen cooperation in the study of Antarctic sciences and environment by sharing resources and data.

The Malaysian delegation also held separate discussions at the sidelines of the ATCM with various related bodies, including a meeting with the Australian delegation to the ATCM on possibilities of working together on legislations related to Antarctica.

The 37th Antarctic Treaty Consultative Meeting (ATCM) is scheduled to continue until 7 May 2014.