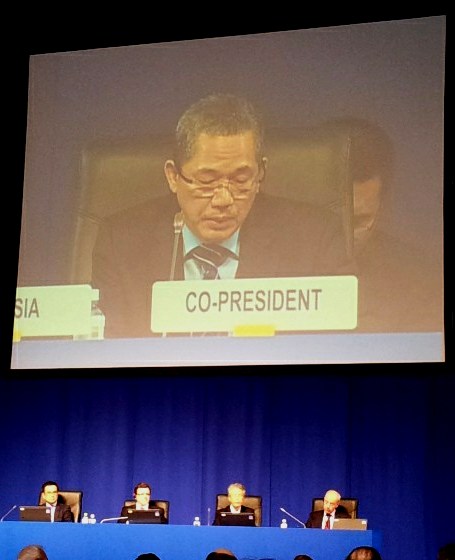 KORIYAMA, JAPAN (15 DECEMBER 2012) – Strengthening nuclear safety is a continuous process with no room for complacency, the Co-Presidents of the Fukushima Ministerial Conference on Nuclear Safety said today.

KoichiroGemba, Japan’s Minister of Foreign Affairs, and Fadillah Bin HjYusof, Malaysia’s Deputy Minister of Science, Technology and Innovation, released the Co-Presidents’ Statement at the end of the Conference’s Ministerial Plenary, on day one of the three-day event.

The conference was organised by the government of Japan and supported by the International Atomic Energy Agency (IAEA). Malaysia was invited to co-chair the Conference because of her respectable and neutral position within the International Atomic Energy Agency.
The statement recognized the progress reported by Japan in response to the Fukushima Daiichi accident, including the present stable status of the nuclear power station and the significant decrease in radioactive release at the accident site.

It stressed the importance of continued transparency in sharing objective information on the progress of decommissioning the plant, remediation and waste management, and encouraged Japan to lead an international effort to obtain data from the damaged reactors.

“The lessons learned from these activities, through their dissemination and related cooperation with the international community, are expected to contribute to enhancing the safety and effectiveness of future decommissioning and remediation activities worldwide,” it said.
The statement emphasised the importance of strengthening the IAEA’s central role in international efforts to enhance global nuclear safety, underlining the Agency’s Safety Standards and the IAEA Action Plan on Nuclear Safety. It urged IAEA Member States to strengthen efforts to implement the Action Plan fully, including the use of international peer reviews and putting the recommendations of such reviews into practice.
It stressed the “utmost importance of establishing and sustaining competent national regulatory authorities with effective independence and adequate human and financial resources”.

It also emphasised the importance of measures to prevent and mitigate severe accidents, including protection against extreme natural hazards, saying that “nuclear power plants should be designed, constructed and operated with the objectives of preventing accidents, and, should an accident occur, mitigating its effects and especially avoiding off-site contamination.”The statement said emergency preparedness and response plans and capabilities should be strengthened at all levels, and emphasised the importance of international cooperation in assessing the environmental and human impact of radioactive releases from a nuclear accident.

It stressed the importance of broadest adherence to the relevant international instruments, particularly the Convention on Nuclear Safety, and of further developing and strengthening communication with the public.
The statement also welcomed the IAEA’s release at the Conference of reports on three International Experts’ Meetings held this year, on reactor and spent fuel safety, protection against extreme earthquakes and tsunamis, and communication in the event of a nuclear or radiological emergency.
Some 117 countries are attending the Conference, which aims to share knowledge and lessons from the Fukushima Daiichi accident, further enhance transparency and discuss the progress of international efforts to strengthen nuclear safety. About 40 of these are attending at the level of minister or equivalent high rank, or head of organization.
Share Tweet