Kuala Lumpur, 18 August 2015 – Outstanding bio-based companies, organisations, and individuals were awarded for their excellence in innovation and scientific advancement in Malaysia’s bio-based industries at the Bio Appreciation Night. Organised by Malaysian Biotechnology Corporation (BiotechCorp) and held at the Putra World Trade Centre, Kuala Lumpur in conjunction with the BioMalaysia & ASEAN Bioeconomy 2015 conference and exhibition, the award ceremony provides a platform to promote the latest biotechnology achievements as well as the commercialisation of biotechnology research findings, products and services. With BiotechCorp celebrating its 10th year anniversary this year, the award ceremony is an opportunity to highlight the success and achievements attained in the bio-based industries since the establishment of BiotechCorp.

Over 250 BioNexus status companies, BioNexus Partners Laboratories, bio-based technology companies, researchers and members of the media gathered at the award ceremony. The awards were presented to 30 recipients in three categories – the Industry Excellence Awards 2015, which recognise organisations or individuals and members of the media for their achievements and efforts in Malaysia’s bio-based industry, as well as their efforts to encourage innovation and the advancement of science in the country; the BioNexus Achievement Awards, which reward BioNexus status companies that have demonstrated outstanding achievements in the bio-based industries; and the BioNexus Partners Excellence Awards 2015, given to all BNP laboratories for their achievements and good laboratory performance in providing bio-based services and expertise. A special Posthumous Award was also given to the late Tan Sri Dr Jamaluddin Mohd Jarjis for his dedication, leadership and contributions in shaping Malaysia’s biotechnology policy.

The award ceremony was officiated by YB Datuk Madius Tangau, Minister of Science, Technology and Innovation. This is the second time the event was organised by BiotechCorp, with the first held in Thistle Hotel, Johor Bahru in conjunction with BioMalaysia & Bioeconomy Asia Pacific conference and exhibition in 2013. The Bio Appreciation Night is one of the avenues in promoting outstanding local bio-based companies and entrepreneurs by highlighting their success and contributions to the industry, thus providing opportunities for the companies to spark future collaborations and attract potential investors as well as deal flows for their businesses. As of August 2015, BiotechCorp has awarded 261 bio-based companies with the BioNexus status, and these companies have generated a total of RM6.4 billion of approved investments and RM3.04 of realised investments. The event’s dinner menu featured fresh produce such as prawns, fish, oysters, lambs and pineapple provided by 9 BioNexus status companies, thus highlighting the quality of the products generated by Malaysia’s bio-based companies and their use in our daily lives. 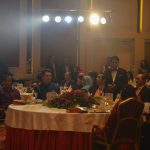 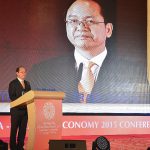 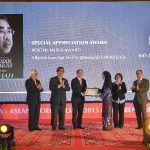 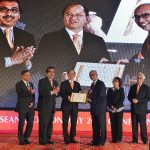 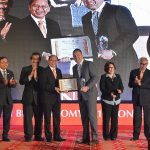 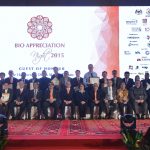