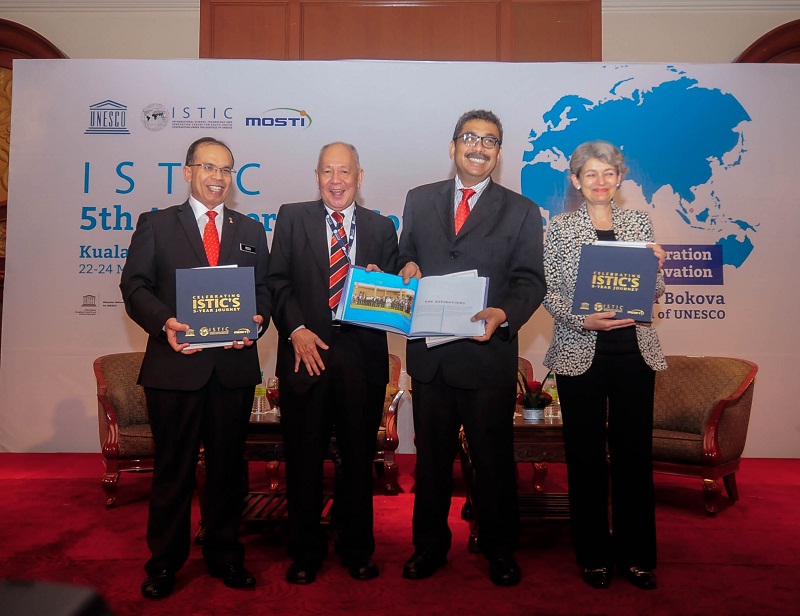 Kuala Lumpur, 22 May 2013 – YB. Datuk Dr. Ewon Ebin, Minister of Science, Technology and Innovation today joined dignitaries, officials, scientists and academicians from all over the world, to celebrate the 5th anniversary of the International Science, Technology and Innovation Centre for South-South Cooperation (ISTIC) at the Opening Ceremony of ISTIC 5th Anniversary Conference in Kuala Lumpur.

In his speech which was delivered by YB. Datuk Dr. Abu Bakar Mohamad Diah, Deputy Minister of Science, Technology and Innovation, YB. Datuk Dr. Minister highlighted ISTIC’s effort in providing capacity building and policy advice to G77 countries in science, technology and innovation (STI), since its establishment in 2008, and commended the Centre’s achievement of conducting 33 capacity building programmes, benefitting a total of 1,585 personnel from 82 developing countries from across the geographical regions over the first 5 years of its inception.

YB. Datuk Dr. Minister also reserved a special mention to ISTIC’s initiative to translate materials on Inquiry Based Science Education (IBSE) from the La main a la pate Foundation from French into English. On this, He congratulated ISTIC on their effort to translate two books from French to English, to be used by teachers in the Anglophone countries and create a La main a la pate mirror website in English which can be accessed by anyone in the world for free.

YB. Datuk Dr. Minister then highlighted Malaysia’s remarkable transformation to an upper-middle income economy in just over 50 years, and reassured that science agenda will continue to be a top priority within developing countries. He also stressed that STI is still relevant, alive and utilised by all segments of the society, from the grassroots right up to top academicians. For Malaysia, STI is considered as the important tool which will hasten its leap to become a high-income country by the year 2020.

Closing his speech, YB. Datuk Dr. Minister expressed his optimism that a review process undertaken by a team appointed by UNESCO in February 2013 will be favourable to ISTIC and a fresh agreement will be signed by Malaysia and UNESCO to continue their collaboration via the hosting of ISTIC in Kuala Lumpur. He later introduced the Guest of Honour, HE. Dr. Irina Bokova, Director-General of UNESCO, who then delivered her speech and officially opened the conference.

ISTIC 5th Anniversary Conference which carries the theme ISTIC: A Role Model for South-South Cooperation Through Science, Technology and Innovation will continue until 24 May 2013. The conference gathers officials, scientists and academicians selected from among participants of ISTIC programmes, as well as members and former members of its Governing Board, STI Advisory Council, strategic partners and UNESCO Regional Office.