UNESCO APPOINTS MALAYSIA TO HOST ISTIC FOR ANOTHER 6 YEARS

PARIS, 8 SEPT – Malaysia is entrusted by the UNESCO to continue hosting International Centre for South-South Cooperation in Science, Technology and Innovation Centre (ISTIC) for another six years.

A renewal of the 2008 Agreement was signed today between  the Minister of Science, Technology & Innovation, YB Datuk  Madius Tangau and the Director-General of UNESCO, HE. Irina Bokova, at the UNESCO headquarters in Paris. By this agreement Malaysia continues to host ISTIC for another 6 years from 2015-2021 which will facilitate ISTIC to continue its mandate as a UNESCO Category II in promoting south-south cooperation.

The extension of the Agreement underscores another milestone of cooperation and commitments of Malaysia in supporting UNESCO in assisting the South countries to enhance their institutional and human capacities in managing their science and technology systems for national development. Moving forward, ISTIC continues to be significant and relevant as 2015 will mark the end of the UN Millennium Development Goals (MDGs) 2000-2015 and the launch of the UN Sustainable Development Goals (SDGs) 2016-2030.

Malaysia was first entrusted to host the International Centre for South-South Cooperation in Science, Technology and Innovation (ISTIC), category II centre under the auspices of United Nations Educational, Scientific and Cultural Organisation (UNESCO) for a six-year period from 2008-2014 through an agreement signed on 21 January 2008 between both parties.

The establishment of ISTIC for South-South Cooperation was a successful outcome of the Second South Summit of the Heads of State and Government of the Group of 77 and China in Doha, Qatar in June 2005. This is a programme for South-South cooperation in Science & Technology with the objective of facilitating the integration of a developmental approach into national science technology and innovation policies; capacity building in science and technology through providing policy advise and exchange of experience and best practices; and creating a problem solving network of centres of excellences in developing countries as well as supporting the exchange of students, researchers, scientists and technologist among developing countries.

Based on the 7 priority action agenda of ISTIC, ISTIC has conducted 55 programmes and has reached out to 2,625 participants from Africa, Arab States, Asia and the Pacific, North America, Latin America, the Caribbean as well as member nations of OIC, IDB and ISESCO since it was established in 2008.

YB Datuk Madius Tangau is on a working visit to Paris from 6-8 September 2015.  Besides the UNESCO headquarters, the Minister also visited La main à la pâte Foundation which is a Foundation for scientific cooperation managed in partnership by the French Academy of Sciences, the Ecole Normale Superieure (ENS) Paris and Ecole Normale Superieure  of Lyon. He was briefed on the work of La main a la Pate (literally translated as ‘hands in the dough’) in promoting innovative pedagogy in the teaching of science nationally and internationally through the inquiry-based science education (IBSE) approach and its relevance and applicability to the Malaysian context.

At the Organisation for Economic Co-operation and Development (OECD), he was briefed on the National Innovation Policy review which is being prepared by OECD. The review aims at supporting the Malaysian government’s effort to strengthen the country’s performance in STI and the report is expected to be completed in time for reference at the ASEAN Summit in November.

During the visit, Datuk Madius Tangau also met with the Malaysian students to exchange views on the latest Malaysia’s economic performance as well as the roles of science, technology and innovation in the Eleventh Malaysia Plan. 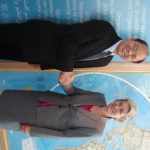 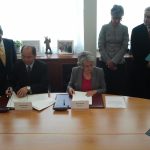