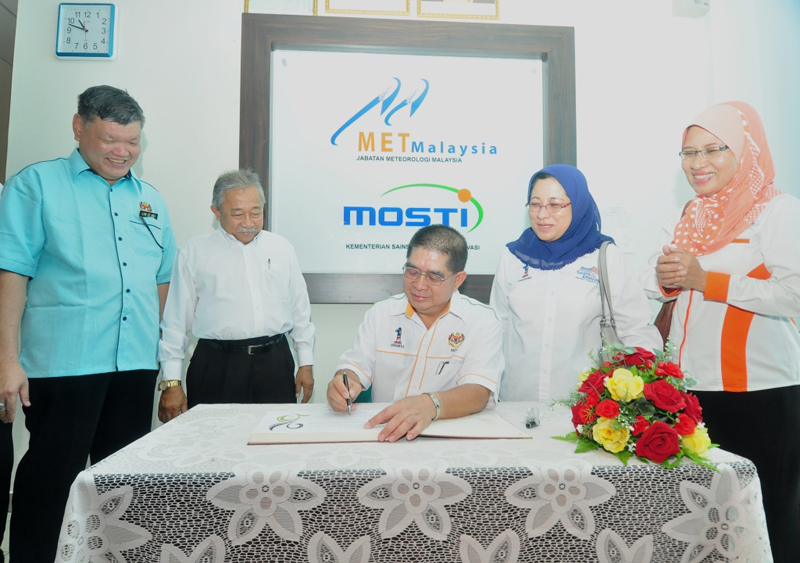 LABUAN (23 March 2013): The Minister of Science, Technology and Innovation, Datuk Seri Panglima Dr. Maximus Johnity Ongkili today launched the Sabah and FT Labuan 2013 World Meteorological Day with the theme Watching the Weather to Protect Life and Property.In this occasion, the Minister also officiate Labuan Meteorological Office at Jalan Pulau Buah.The World Meteorological Day is celebrated on 23 March every year and this year’s theme emphasize the importance of meteorological services in enhancing safety and countries resilience in facing the increasing of extreme weather events due to global warming.Weather observation in FT Labuan was started in 1947. The new RM5.32 million office which was completed in 2008  was built under the upgrading of Labuan Airport project in 2005. In line with the enhancement of functions of Malaysian Meteorological Department, the Labuan Meteorological Office expands its services to include the aspects of weather, earthquake and tsunami. Besides providing aeronautical meteorological services to improve the efficiency and safety of flight operations at the Labuan Airport the office also functions as a monitoring center to issue forecasts and weather warnings and sea conditions of Malaysian water to the arm forces and people in LabuanIn the effort to enhance the safety of aviation operation in Labuan Airport, this office is equipped with modern and sophisticated weather monitoring equipments and communication system that comply with the international standards.  This office has direct access to the National Tsunami Early Warning Center located in Meteorological Headquarters, Petaling Jaya.  Among the Tsunami Early Warning System equipments installed at the strategic places in Labuan are tsunami siren at Layang-Layangan Bomba Office, coastal camera at UMS Labuan and tidal gauge at Labuan Port.“With this system and access facility, the initial information can be channeled to Labuan residents within 10 minutes after a tsunami is triggered by the strong earthquake in the Manila Trench. The warning issued will give at least 2 hours for the Labuan residents to move to a safe place”, said Datuk Seri Panglima Dr. Maximus.This office also helps in increasing public awareness on the tsunami and extreme weather. Various awareness campaigns have been carried out to ensure that the people of Labuan are prepared in the event of tsunami were to affect Labuan. In conjunction of the World Meteorological Day, an exhibition was held with the participation of various government agencies. Also held is the prize presentation to the winners of the innovation competition of Neighbourhood Association sponsored by the Department of National Unity and Integration The Minister also gives hampers in a form of basic food to 30 recipients consisting of single mothers, orphans and those who are in need around the FT Labuan.